Rugby league yesterday and tomorrow
I admit that nostalgic romanticism for many of us who have lived through some of the unforgettable highs of rugby league has had its day when tempered with necessary commercialism. However, Rugby League will not be able to deal with the pressures it will face unless it manages to move forward and address the future of rugby league in open debate, for the sake of all stakeholders. Debates will still remain, whatever happens, but if a modern sport wants to have a commercial base, then it cannot leave heritage and its values behind in any debate.
The agenda should be around four important considerations…
1. Consolidation? 2. Expansion? 3. Contraction? 4? Contraction then expansion

The year 1996 was almost 25 years ago. It was the year that the ARL and Super League “war” began. I still remember that up to year 2000 the pain of telling hundreds of players that there were no longer three grades in ARL and its 12 clubs, nor 10 Super League clubs. It was then to be 14 clubs, one grade. I felt their distress as we paid out players who had a love of game. This procedure was repeated with the Chargers, Brisbane Crushers, Perth, Adelaide, Saints, Illawarra, Wests, Tigers, Souths, Mariners and Norths, and it became part of the game’s unfortunate history. Coupled with the mergers that were done without consideration of cultures (Manly/ Norths and Wests /Balmain} created a concern we experience even today. So, before any agenda is tabled, then prime consideration must firstly be for the players and then the fans because we tend to forget that many of today’s players had not been born in 1996.

It seems inevitable that change is necessary, and in order that the move ahead benefits all in the long term and not just a few in the immediate future, then discussion must involve those with a vision who hopefully will be the ones to inherit the reshaped future they create. If we continue to just live in the practices and notion of the past, we could well find ourselves in complete control of a rugby league world that no longer thrives. It’s changed and its changing, and we need to be across the new world of rugby league. Value the past but rugby league cannot live in it.

Junior clubs are struggling because the volunteer system of 100 years ago is now changed, as the volunteers that have enabled the game to flourish and who contribute at the game’s introduction and development level are declining in numbers due to pressures on non -traditional family structures and everyday demands. On the plus side, the Indigenous players have gone on to enhance the coaching and administration of the game at all levels and contribute more than 12% of today’s elite.

The Future
There can be no expansion or consolidation without an increase in sustainable player numbers. Development from within the southern states have been in existence for around a century, yet produce very few players to the NRL teams. There are 11 million people living south and south- west of the Murray, and in the last 100 years, player numbers grew but there were no strategies to identify talent through developing coach education, as the focus was community rugby league driven. There are more than 4000 registered players in Victoria and a well conducted VRL. However, they need help by way of NRL quality coaches to coach their coaches and thus elevate levels of coach and player education. Remember when we were kids, the coach was the one who had played or loved the game. Well it’s the same in Victoria, as the coach is still there but the Victorian player with talent and desire to advance their talent cannot see any pathway, so does not necessarily progress.

Good coaches will take players to a place they cannot take themselves. Eventually, without that teaching, their talent never evolves to a point of recognition. As a result, the pathways for developing talent is just not evident to everyone. We must demonstrate that the NRL presents opportunities for every state’s athletes, particularly those with a physiological and psychological profile which suits RL and excels in areas different to AFL.

Known pathways for youths in these states is paramount, as we cannot grow what is not planted and nourished. Additionally, there are 7 million people who were not born in this nation, many of whom do not play, watch, view, read about, listen to, sponsor or attend games because they haven’t for many reasons been encouraged to embrace rugby league as their game/sport of choice. Imagine if one of the networks for one Canterbury or Intrust State game advertised in Chinese papers that a game with closed captions in Mandarin was to be aired NFL does it in Hispanic with the result they had in attracting engagement in a range of ways. If we continue to ignore the changing demographics of this nation then we are doing this wonderful game a great disservice. Further, more than 80% of this nation’s population lives within 50 kms of the seaboard, meaning the importance of recognising demographics when team movement or entry is considered is vital for the future. The CRL and NSWRL are to become one state with one direction soon and that will benefit the decision making by just one Board.

In 2018 48% of NRL players were from Pacific nations by birth or heritage. In 1968/70 when I was with Saints I signed Apisia Toga- a Fijian. Then the Pacific player ratio was around .1%. Our great indigenous players make up for over 12%. It demonstrates that we must continue to diversify our traditional growth, embracing all and in every state. Diversity by way of race, ethnicity, and belief is now always on the nation’s agenda and how the ARLC addresses diversity is in the interests of all in the long term. They must do so whilst protecting the games heritage and integrity. This is a game, born of need 110 years ago… it’s the duty of all who play, watch and administer to ensure that in the end we who love this game must be able to rise successfully to the challenges of growth that we face today.

I believe that firstly we must expand our supporter base and demographic, and our sponsor base, by addressing the nation’s demographic changes, and in doing so also address Sydney’s defining boundaries.

The City of Sydney’s demographics are vastly different to those of 1908 when the Council boundaries were used to define clubs .Revisiting Sydney’s boundaries with a demographic lense as a key driver for growth for rugby league should also be an agenda item by the rugby league strategists.

What was done in haste previously, we are paying for now. It should have been Norths and Balmain not Norths and Manly. Boundaries need redistribution, as a city which in 2000 (ABS) was 4.2 million and is now 5.5 million, can increase participation of players, fans and viewers if the strategy is right.

Gold Coast
The history of the City of the Gold Coast and rugby league is well documented, and the courage of those who believe an NRL team could be sustained are ready to face the prospect of a future in question. Two of the best Intrust League teams and three of the game’s major rugby league schools are in this city. The Gold Coast Junior League was created by Gold Coast people, and is well conducted at every level. One cannot deny that rugby league is in the city’s soul, and it will always remain as part of its DNA. It must survive 2019 and beyond because this game needs it to be part of the Gold Coast’s future, deserved by both the need of how the city is viewed in relation to Brisbane and for some of the best loyal fans in the nation. Of one thing you can be sure, move the team to Brisbane and rugby league Gold Coast will never return to the NRL.

The readers of this blog care about the game. I believe they care that in the year J.J. Giltinan was inducted into the Hall of Fame, rugby league is under threat yet again. We must never allow the very fabric of the game’s values to be threatened, but gain the knowledge necessary to allow the ARLC to make the most democratic decisions for change, because making decisions of value are not difficult, you just need to know what those core values are. Paul Broughton OAM 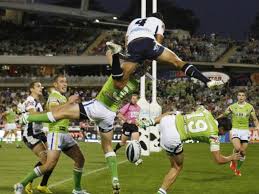