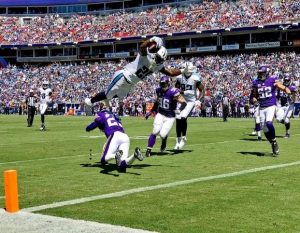 We are living increasingly in an era of “Concussion” and the evolution of knowledge becomes of primary importance. Each day there are articles about concussion as regards the dangers, controversies, denials and what parents should know. Now there are articles suggesting that concussions and recovery are slower in the female who’s increasingly participation in the contact sports is welcomed by everyone. But where are the proof of facts.

The playing fields of the NRL have for many years provided the medical world at large with some of the greatest orthopaedic research laboratories ever and the same can occur with head injuries.

What is needed is a concerted combined effort by the major global contact sports aimed at the “Medical research into the prevention, diagnosis and treatment of head injuries”.

In order to achieve an International Foundation with the charter and finances necessary then there must be a catalyst that will generate the revenues with continuity and also create a global factual awareness program.

A game between the NRL (including ARU and AFL players) and the NFL under Hybrid laws would generate incredible revenues to further extend awareness and provide funding for the conducting of the research.

Acting in isolation of other impact sports, and different medical research laboratories in research of player safety in regards to head injuries can only minimise the resulting research

The real challenge for the impact sports is to ensure their game remains increasingly popular whilst progressively making sure it becomes safer.

The NRL has to find the most effective way possible so can it remain so popular whilst also becoming safer? The fans spoke years ago that they love the aggression but deplored illegal violence.

The initial response to the NRL versus NFL

The initial reaction to the concept of the game with modified rules between the National Football League (NFL USA) and National Rugby League (NRL Australia) with additional rugby players from Australian Rugby Union (ARU) and Australia Football League (AFL) would be “It will never happen”.

The NFL Foundation Charter and the NRL share a common desire in retaining the integrity that is the aggression of both sports whilst progressively and continually eliminating the chance of head injuries. The results of such research would be for the benefit of all and an enormous contribution by both nations sporting giants to society as a whole, not just the athletes concerned.

The NRL and the NFL are games that evolved from Rugby and in many ways the similarities are not recognised. The NFL is said to contain the two worst aspects of American society that of committee meetings and violence. The committee meeting aspect of the NFL will need some adjustment, but the plays always begin with everybody behind the ball.

Forward Pass in the NFL a quarterback will throw the ball to a wide receiver or handoff to a Running Back. In the NRL a playmaker will handoff to forward or kick to a winger. NFL uses the arm to deliver the football whilst the NRL uses the foot.

In the NFL there can be only one forward pass in any set play and there are laws as to who can and who cannot receive. However the ball may be passed backwards at any time, but given that the ideas is to advance the football collateral passes not used to often.

On Side. All players must be behind the ball when it is snapped in NFL or played in rugby league. I played and coached in early 50s under the one yard rule and there was plenty of “bridging” by the front rowers before the halfback received the ball directly behind them from the ruck. In today’s rugby league there is no contest in the scrum as the ball is in reality set to apply this could be a quarterback behind the scrimmage.

The NFL Scrimmage Is little different from the scrum in rugby league. In the NFL there is an imaginary line drawn through the centre of the scrimmage from which neither the offence nor the defence can encroach until the ball comes into play. The two lines are one yard apart (please note that USA is a non-metric country). The “snap by an offensive lineman is no different to the play the ball or scrum in rugby league

The major difference between the two codes is that in the NFL any player may block another player’s passage to the ball carrier so long as he does not hold or trip the player he intends to block from the ball carrier. The kicker may not be contacted after the kick before his kicking leg touches the ground

It is given that the NFL will continue to use the hard helmet albeit with modifications. However the University of New Hampshire is completing a survey in regards to no helmets and in this contest there should be no helmets. Certainly the opportunity is for the major manufacturers of head gear to use the game to conduct further research on the development of a safe helmet for use in the rugby codes or perhaps even the NFL.

The playing field measurements vary little in comparison to 13 in rugby league and 11 in NFL. The major difference is in the stoppages of play in a breakdown. As this would require major changes to rules then it is suggested that the one yard rule be played in any part of  field and NFL are not the centre and the rule relating to scrimmage be adhered. The sweep plays used in rugby league at the same as those used in the NFL except offensive linesmen try to stop the tackle.

The Era of the Concussion

I first went to USA in 1974 and learnt about a wonderful NRL game but rugby league evolved in a direction governed by the fans that’s why it’s so successful. I can think of no better reason than to ensure that player’s welfare is prioritised whilst the integrity of the game is played for by the desire of the players to participate and for the enjoyment of the fans. The conceptual game will certainly invite progress, probably without perfection, but it will cement closer relationships between two nations both with a similar philosophical approach to a game of aggression acceptable in those societies.

The cultural power of rugby league particularly in New South Wales and Queensland is part of the glue that binds us as a nation and State of Origin is now part of an Australian tradition. The challenge is to ensure the continued growth of a national sport whilst increasing the safety of those who participate and the enjoyment of those that appreciate the athleticism of the game. This would acquire an enormous cash injection to the medical Foundation given the responsibility and the NRL versus NFL can achieve that objective.